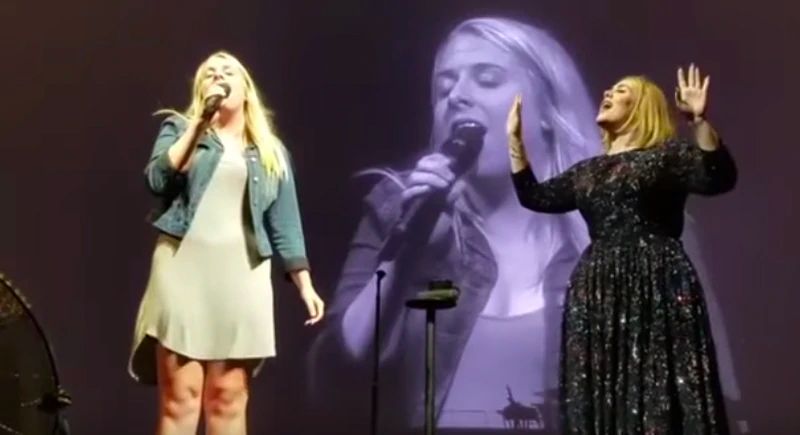 See Full Article Here
Singing before a sold-out crowd at Chicago’s United Center is likely a dream come true for Adele, let alone for the young Naperville woman pulled from the audience to share the stage with the megastar chanteuse.

A photo posted on Instagram and a video on YouTube tell the story. Ally Gargano, a Neuqua Valley High School graduate and former member of the Young Naperville Singers, somehow caught the attention of Adele as she sang along at the British singer’s concert Wednesday night.

Gargano was invited onstage to sing a few bars of “Make You Feel My Love,” which seemed to delight the “Hello” singer as she gave the spotlight over to Gargano and stepped back to sing along on the side.

“That was amazing,” Adele said when she finished. “Thanks for pointing her out, guys.”

The singer-songwriter has made a practice of calling fans to the stage with her and asking them to sing one of her songs or just chatting with them and giving them a hug.

Gargano, who could not be reached for comment, posted a photo on Instagram of her onstage experience, which prompted a flurry of social media response. The Young Naperville Singers reposted the photo and video clip, along with a message calling her an “absolute sweetheart” and announcing they were “proud of her.”

A post on totalsororitymove.com, which identified Gargano as a member of the Alpha Phi sorority at the University of Iowa and a member of the college’s choir, rhapsodized about her “singing like an angel” and noted that she “blew the crowd away.”