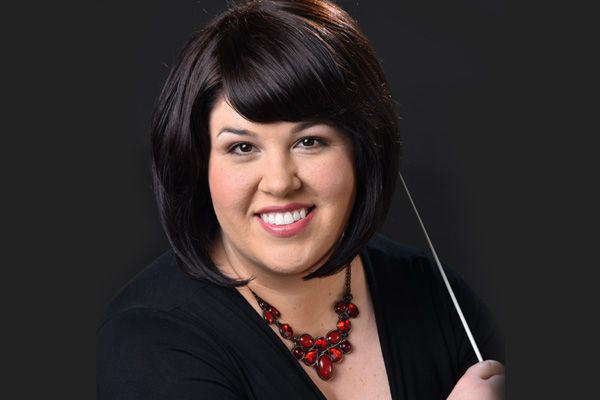 Dr. Andrea Ramsey enjoys an international presence as a composer, conductor, scholar, and music educator. Her teaching experiences range from work with adolescents and children’s voices to high school and collegiate voices. She enjoys regular opportunities to conduct all-state and divisional level honor choirs, festival events at Carnegie Hall and serves as a principal conductor for the Pacific International Young Women’s Choral Festival in Eugene, Oregon. Before leaping into full time composing and guest conducting, Andrea held positions in music education and conducting at The Ohio State University and the University of Colorado, respectively.

An ASCAPlus award-winning composer, Andrea believes strongly in the creation of new works. She enjoys residency collaborations with ensembles and festival choirs, some of which have included: the Allegro Choirs of Kansas City, Ithaca College, and the Crescent City Choral Festival in New Orleans.

YNS was thrilled to work with Dr. Ramsey during our 35th Anniversary celebrations in 2019. YNS commissioned and premiered “The Light Returns” under the direction of Dr. Ramsey. This work featured the intermediate and advanced choirs of YNS, and the singers really enjoyed rehearsing with Andrea and singing some of her other compositions as well. 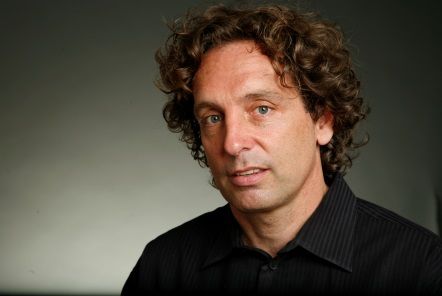 Jim Papoulis composes in many genres and is known for work that combines contemporary, classical, and world sounds.
Papoulis has made significant contributions to choral music by revitalizing the choral repertoire with songs whose roots are classical and world, with voicing that incorporates choirs, vocal percussion, and world rhythms.

His music has been featured at:

Mr. Papoulis has done songwriting workshops with our singers here in Naperville, and at the Queen City Children’s Choir Festival in Cincinnati. The singers come away from his workshop with a sense of accomplishment, knowing that they have contributed to the composition of a brand new song. 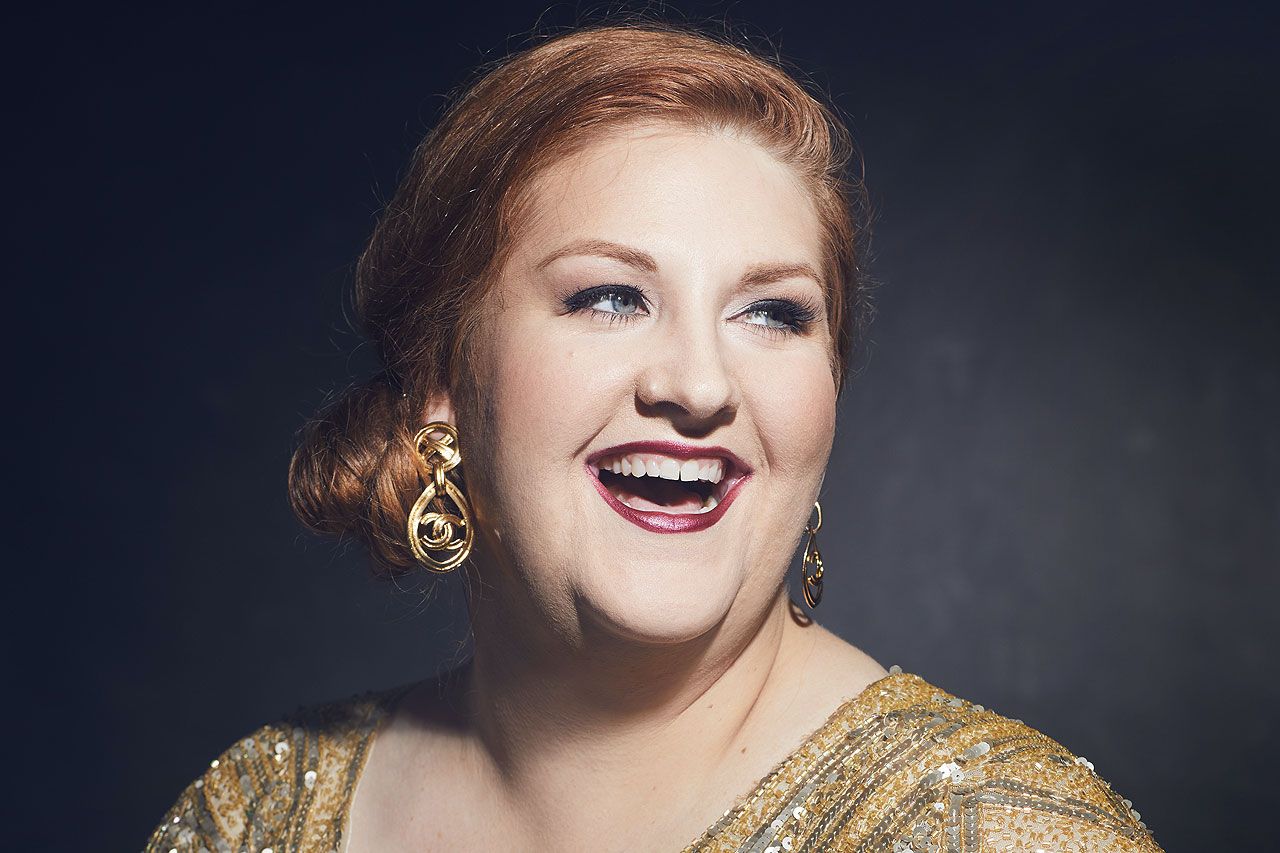 Soprano Tamara Wilson has achieved international recognition for her interpretations of Verdi, Mozart, Strauss, and Wagner and is the 2016 recipient of the prestigious Richard Tucker Award in Opera. Other recent honors include an Olivier Award nomination and Grand Prize in the annual Francisco Viñas Competition.

Ms. Wilson made her acclaimed Metropolitan Opera debut in Aida and has continued to take the opera world by storm. She has performed in Calixto Bieto’s new production of La Forza del Destino at the English National Opera; she inaugurated the new opera house in Kyoto, Japan with Seiji Ozawa as Rosalinde in Die Fledermaus. She was heard at Oper Frankfurt for her first performances as the Empress in Die Frau Ohne Schatten conducted by Sebastian Weigle and subsequently released by Oehms Classics. She triumphed in Act 3 of Die Walküre as Brünnhilde with Mark Wiggleworth and the BBC National Orchestra of Wales at Royal Albert Hall and with the Concertgebouw Orchestra conducted by Valery Gergiev in Act 3 of Die Walküre as Sieglinde.

Tamara Wilson is an alumna of YNS. She sang with us when she was in her formative middle school years; former YNS director Sandra Stoneham was a strong influence on Tammy’s love of singing. Recently, Tammy held a virtual Master Class with over 70 YNS singers; YNS is proud to claim Tammy as one of our own.

Here are some links to Tamara Wilson’s music: 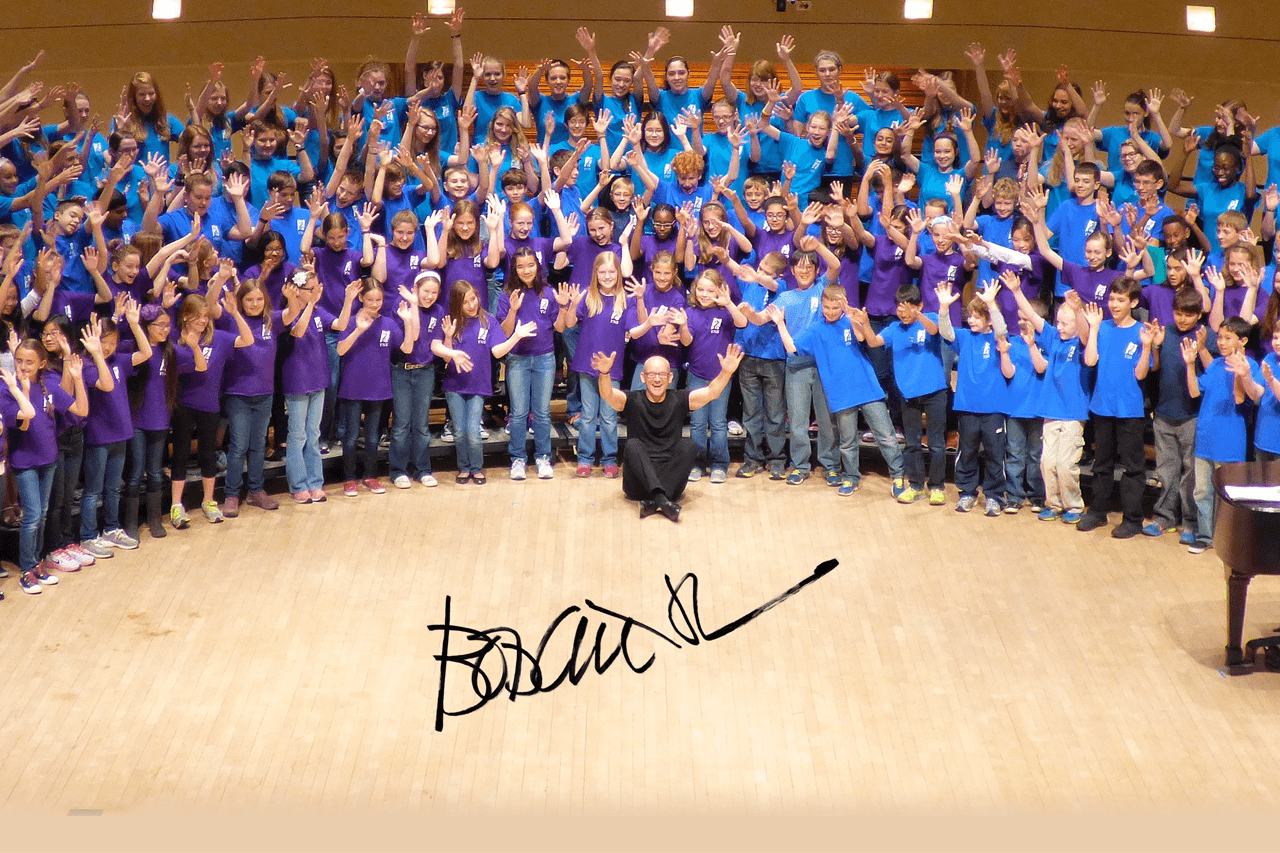 Bob Chilcott has been involved in choral music for most of his life. He was a chorister and choral scholar at King’s College, Cambridge, and for twelve years was a member of the vocal group The King’s Singers. Since 1997 he has worked as a full-time composer and has written a wide variety of choral music, including a significant amount of music for young choirs. He has over one hundred pieces published by Oxford University Press, and a number of his choral works have been published in German, Swedish, Norwegian, and Slovenian.

As well as being Principal Guest Conductor of the BBC Singers, he has conducted many other leading choirs in their field, including the World Youth Choir, the RIAS Kammerchor, Orphei Drangar from Sweden, Jauna Musika from Lithuania, the Taipei Chamber Singers, and the Tower New Zealand Youth Choir. He has worked in 23 countries on six continents, and at festivals from Festival 500 in Newfoundland to Tallinn, wherein 2004, as the first foreign musician to be invited, he conducted a choir of 7000 young singers at the Estonian Song Festival is one of his most popular pieces, “Can you hear me?”.

In 2014, Mr. Chilcott came to YNS to help us celebrate our 30th Anniversary with a multi-day rehearsal and performance experience. In addition to premiering the commissioned work, “The Sun and Stars are Mine”, all of the YNS choirs enjoyed rehearsing with Mr. Chilcott and performing several of his best-known choral works. 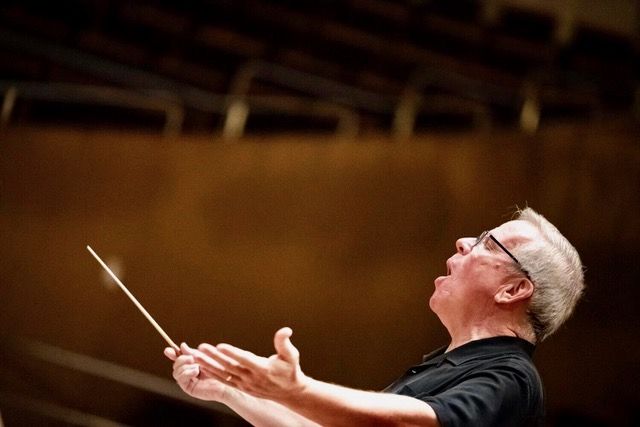 Grammy Award winner Jerry Blackstone is a leading conductor and highly respected conducting pedagogue. He currently serves as a Visiting Professor of Music at the Wheaton College-Conservatory of Music, where he conducts the Concert Choir and teaches conducting. Professor Blackstone was a member of the faculty of the University of Michigan School of Music, Theatre & Dance for thirty years, where, as Director of Choirs, he led the graduate program in choral conducting, oversaw the University’s eleven choirs, and upon retirement was named Professor Emeritus of Music (Conducting). In 2006, he received two Grammy® Awards, (“Best Choral Performance” and “Best Classical Album”) as chorusmaster for the critically acclaimed Naxos recording of William Bolcom’s Songs of Innocence and of Experience.

Professor Blackstone is considered one of the country’s leading conducting teachers, and his students have been first place award-winners and finalists in both the graduate and undergraduate divisions of ACDA’s biennial National Choral Conducting competition. His 2016 rehearsal techniques DVD, Did You Hear That? (GIA Publications) deals with the conductor’s decision-making process during rehearsal. Santa Barbara Music Publishing distributes Blackstone’s acclaimed educational DVD, Working with Male Voices, and also publishes the Jerry Blackstone Choral Series.

Professor Blackstone has two grandchildren in YNS, and he has served as a guest speaker at our YNS Family Open House. 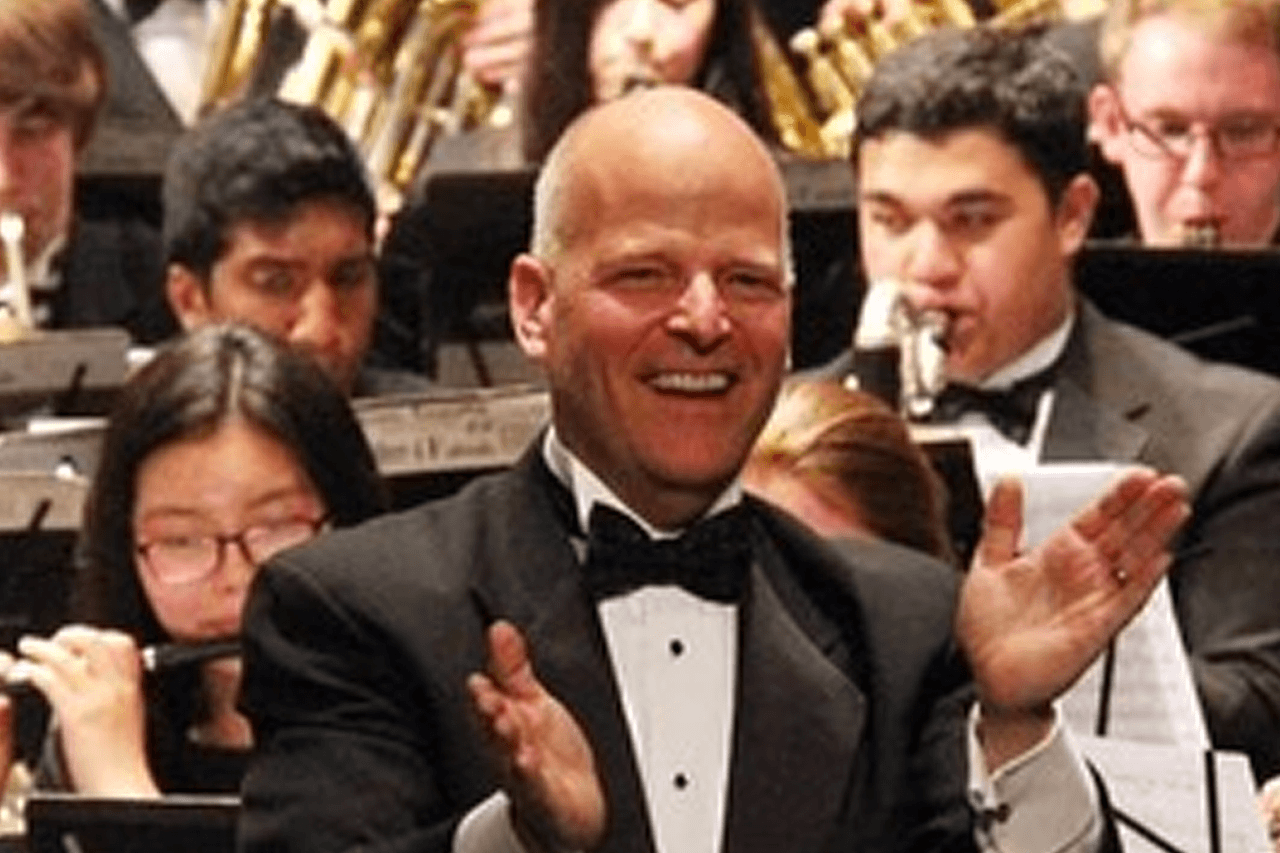 Charles “Chip” Staley directs the Wind Symphony at the Merit School of Music in Chicago. He teaches graduate classes at Vandercook College of Music, serves as an Educational Clinician for Conn-Selmer, and is the Founder and President of ARTSpeaks, Inc.

Staley began his teaching career at Eisenhower High School in Blue Island, Illinois, before moving to Waubonsie Valley High school in Aurora. Transferring to Naperville’s Neuqua Valley High School when it opened in 1997, he served as Fine Arts Department Chair before retiring from public school teaching in 2015.

Bands and orchestras under Staley’s direction have performed at the Midwest Clinic, Chicago’s Orchestra Hall, the University of Illinois’ Krannert Center and at venues in the People’s Republic of China, England, Germany, Austria, Switzerland, Spain, Hungary and the Czech Republic. The Merit School of Music Wind Symphony will be a featured performer at the 2019 Illinois Music Educators Conference and share a concert with the University Illinois Wind Symphony at Krannert Hall on May 1, 2019.

Under Staley’s leadership, Neuqua Valley High School was twice recognized by the GRAMMY® Foundation as the National GRAMMY® Signature School and was awarded the 2009 John F. Kennedy Center for the Performing Arts National Schools of Distinction in Arts Education Award.

Chip Staley has served as a guest speaker and advisor to YNS. 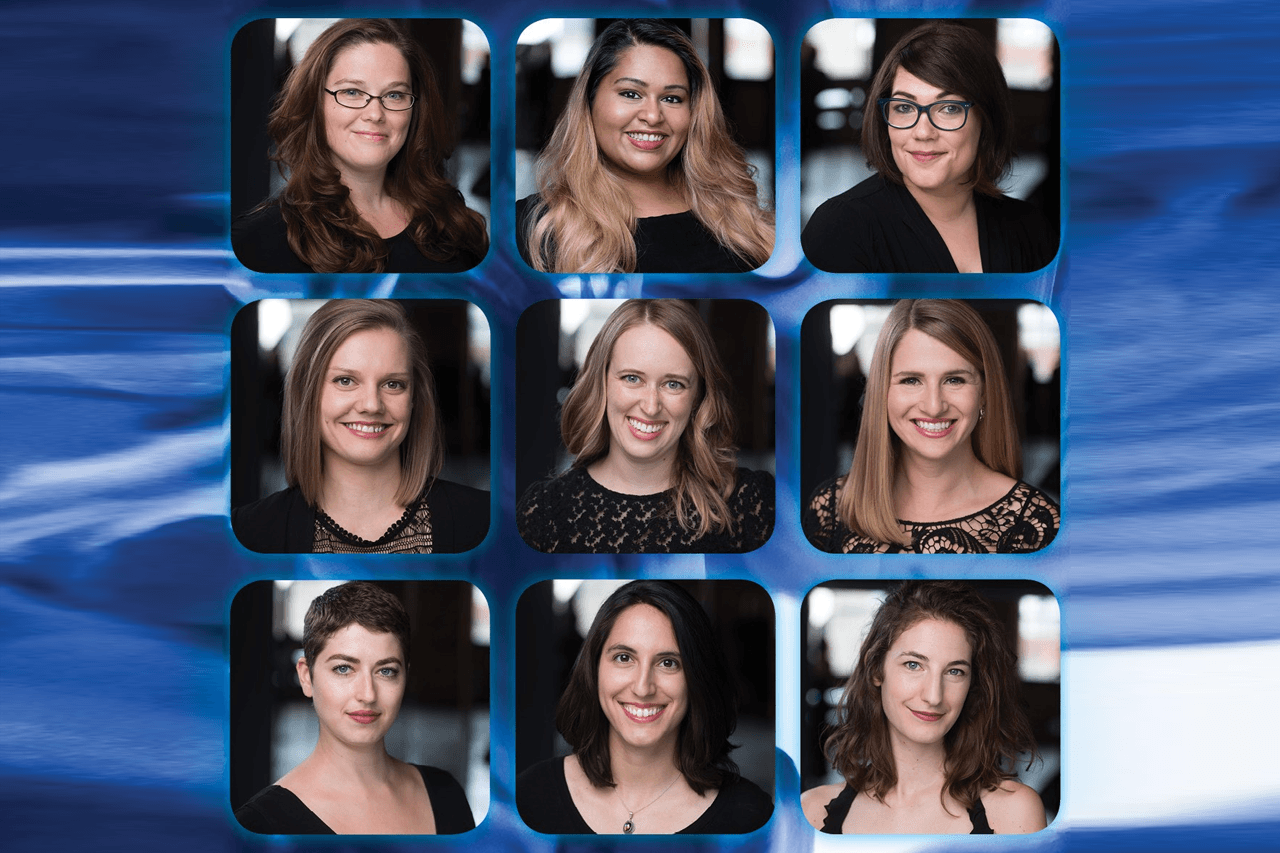 La Caccina is a professional women’s vocal ensemble based in Chicago, founded in 2011 by three friends who shared a passion for choral music. La Caccina finds its namesake in Francesca Caccini, a prolific Baroque composer known for her virtuosity, musicality, and beautiful singing voice. Following in Caccini’s footsteps, the women of La Caccina bring a wide range of expertise to the ensemble, enabling them to easily adapt to a wide range of musical styles – from Renaissance madrigals to South African folk songs, and from contemporary pop songs to classical masterworks such as Vivaldi’s Gloria in D and Britten’s Ceremony of Carols. Over the past six seasons, La Caccina has collaborated with ensembles including Pavo String Quartet, the DuPage Symphony Orchestra, and bluegrass trio Glass Mountain. The ensemble has commissioned and premiered a dozen works by composers including Katherine Pukinskis, Augusta Read Thomas, Matthew Harris, and Ed Frazier Davis, among others. In 2017, La Caccina received a grant from the Chicago Department of Cultural Affairs and Special Events to record and release their latest album, Open Book. No matter the music, La Caccina’s expressive, emotional singing highlights the versatility of women’s voices and brings musical excellence, integrity, and honesty to every performance.

La Caccina came to Naperville to sing with the advanced YNS choirs in February of 2020 on the “Rise Up” event. Carling Fitzsimmons, Artistic Director of La Caccina, said of the experience, “When we started La Caccina, there were so few places for young women to share their voices and know they would be heard; working with and listening to [the YNS singers] last weekend, we know that the future is in very good hands.” 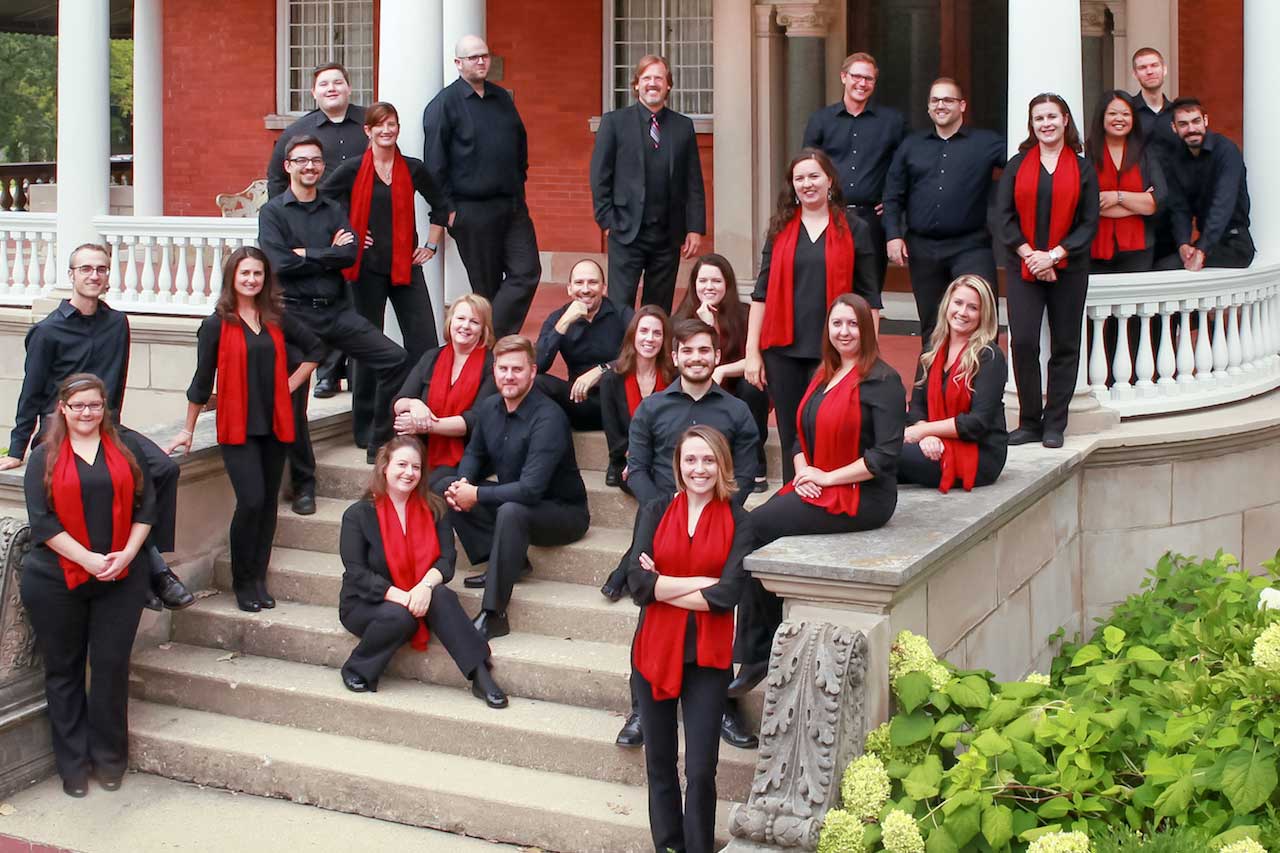 Established in 2009 by Dr. Eric A. Johnson, Cor Cantiamo is a professional chamber choir whose creative programming and artistry weave contemporary music with choral masterworks to present concerts designed to inspire and engage audiences. This ensemble-in-residence at Northern Illinois University’s School of Music has achieved critical acclaim and recognition for their musicality, impassioned performances, and versatility.

The mission of Cor Cantiamo is to enrich and empower the community through performances of contemporary choral music, commissions, and music education outreach programs.

Cor Cantiamo has performed multiple World and U.S. Premieres and works directly with contemporary composers from around the world. Recent premieres include Verdad (2019) by Libby Larsen, When Did We See You? (2018) by Dominick DiOrio, The Wings of Our Children (2017) by Timothy Takach, and The Seven Heavens (2016) by James Whitbourn.

Cor Cantiamo has also developed an active and successful recording program with an emphasis on recording contemporary works and collaborating with commissioned composers.

Under the joint direction of Angie Johnson and Eric Johnson, Cor Cantiamo and YNS presented “Catalyst”, a concert at Wentz Hall designed to bring attention to the power of music to change the lives of young people.