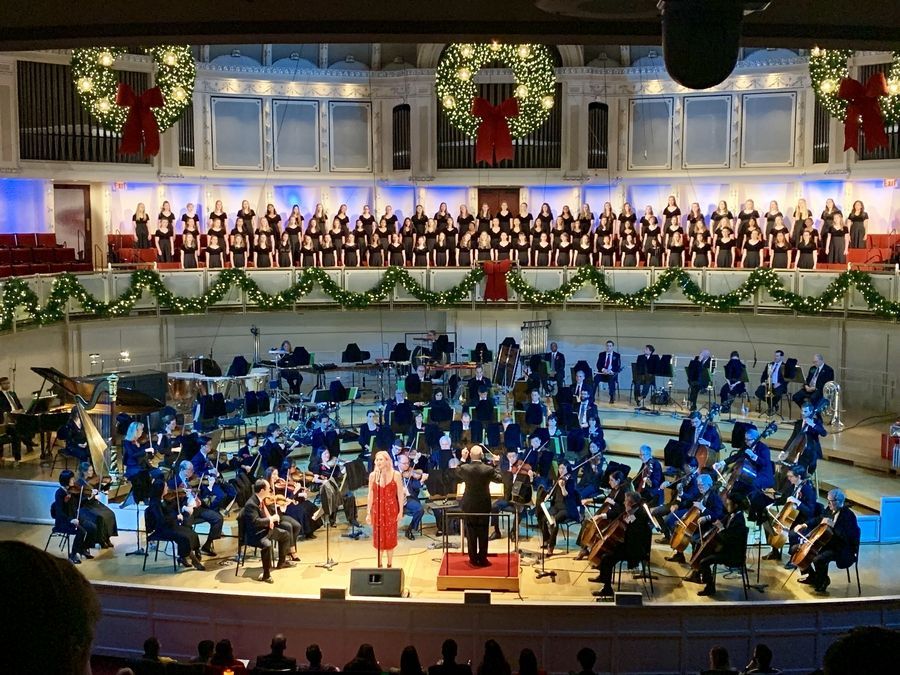 See Full Article Here
Young Naperville Singers is extremely proud of its Bella Cantare and Bella Voce choirs, who performed at Orchestra Hall Symphony Center in Chicago with members of the Chicago Symphony Orchestra for the “Merry, Merry Chicago” series of concerts in December.

Bella Voce and Bella Cantare are the two most advanced female ensembles in Young Naperville Singers, and they were honored to be performing in the “Merry, Merry Chicago” concerts. These young women accepted the challenge of making room in their busy lives to perform in this concert series; they made eight bus trips into the city for two rehearsals and the seven-concert series.

This is a remarkable commitment for busy teenagers, but Young Naperville Singers was able to showcase a minimum 90-voice contingent for each concert.

Freshman Erin Foye said of the experience, “It opened my eyes into a day in the life of a professional musician, whether it’s conducting, playing an instrument, or singing as a soloist. I am so honored that YNS was given this amazing opportunity!”

The Young Naperville Singers is excited to celebrate its 35th year of encouraging young people to sing, grow and lead.

This organization has grown from its founding into a 10-choir, 400-voice musical powerhouse. Founded in 1984 by Helen Grubbs, the Young Naperville Singers continues to grow and attract singers from a wide range of communities in the western suburbs of Chicago.

Singers from first- through 12th-grade audition for Young Naperville Singers, whose mission it is to sing with excellence, to share music with the community and the world, and to lead the way to new musical vistas.

Under the strong musical leadership of Artistic Director Angie Johnson, Young Naperville Singers has performed locally, nationally, and internationally. Recent performances include the North Central Division ACDA conference in Chicago and a performance tour in Austria, Italy, and Slovakia.

Coming soon for Bella Voce and Bella Cantare and their male choir counterpart, Canto Vivo, is “Catalyst”, a collaboration concert with the 24-voice professional ensemble, Cor Cantiamo, under the direction of Eric Johnson of Northern Illinois University in DeKalb.

In the summer of 2019, the two Young Naperville Singers choirs will travel to Prague, Krakow and Budapest to spread their message of joy in singing.